Few studies grab one’s attention like this study of the Duke of Marlborough’s political and military career and his influence on the development of British America in the early eighteenth century. Dr Stephen Saunders Webb, Maxwell Professor of History and Social Science and Professor of History Emeritus at the Maxwell School of Syracuse University, has already provided The Governor’s General: The English Army and the Definition of Empire, 1569-1681 (1979), 1676: The End of American Independence (1984), and Lord Churchill’s Coup: The Anglo-American Empire and the Glorious Revolution Reconsidered (1995). These provocative studies downplayed the role of commerce and colonial self-government in the making of the British empire, and instead, emphasized the role of governors generals (royal governors) and the military in shaping imperial policy in the development of the Anglo-American empire. Webb has stressed that the English monarchy since the restoration of Charles II controlled the colonies by the appointment of experienced military officers to administer them with the support of military troops or what he calls “garrison government.” He believes that militarized administrations took control of colonial governments by 1676. He goes further in his examination of the Glorious Revolution and stresses that John Churchill (the future Duke of Marlborough) led a Protestant coup d’état against the Catholic James II, joined with William III of Orange and his invasion of England in 1688, and then worked to ensure that Protestant military officers took control of the administration of the British empire. Most importantly, Webb points out that from 1660 to 1727 ninety percent of the royal governors overseas had served in the British army (p.xi).

In the present work, Webb continues his examination of the role played by military officers in their administration of the Anglo-American empire. He focuses on the role of the Duke of Marlborough, the captain general of the British army (1702-1711, 1714-1717). To do so, the author divides his work into three parts, with the first two sections devoted to Marlborough’s command of the British and allied armies in the War of the Spanish Succession (1701-1714). Webb uses the last section to explain the roles of Daniel Parke, Robert Hunter, and Alexander Spotswood, all officers under Marlborough, in the administration of the empire.

Webb first provides the reader an uncritical view of the Duke of Marlborough as a statesman and commander of the allied forces.  He professes that the captain general exercised command through the agency of his staff officers in Britain, Europe, and America. Webb presents a politico-military depiction of Marlborough’s ten military campaigns from 1702 to 1711 in the Low Countries and Germany against Louis XIV’s France. The study goes over the traditional ground of the duke’s sieges and the battles of Blenheim (1704), Ramillies (1706), Oudenarde (1708), and Malplaquet (1709). The victory at Blenheim saved England’s Austrian ally, forced Bavaria out of the war, and put France on the defensive. Webb emphasizes that Marlborough’s victory against the French at Ramillies in the Spanish Netherlands led to the union of England and Scotland, and Scotland’s full participation in the Anglo-American empire (p.145). The victory and aftermath of Oudenarde drove the French out of the Spanish Netherlands. Marlborough, in preparation for an invasion of France, then forced the Sun King’s army from the field at the bloody battle of Malplaquet, but the French army was left intact to block the road to Paris.  Afterwards, political changes in Britain, with the captain general’s loss of royal favor and the rise of the Oxford-Bolingbroke ministry, resulted in Marlborough’s dismissal in 1711 and the Tory abandonment of Britain’s allies and a separate peace agreement with France. Marlborough was restored to his former position as captain general of the British army with the accession of George I in 1714. 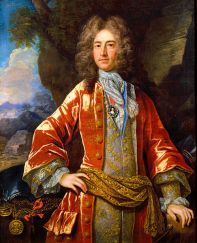 Webb argues that Marlborough had an imperial vision. He wanted to protect the principles of the Protestant coup of 1688 and the Protestant succession in the British empire. As such, the duke had his trusted military officers appointed to positions of leadership throughout the empire. He sought to drive back the French threat to the Anglo-American empire that stretched from the Leeward Islands to the Hudson Bay. He firmly believed, according to Webb, that America could be won on the battlefields of Europe. In fact, British success prevented Louis XIV from sending the reinforcements need to conquer the American colonies. 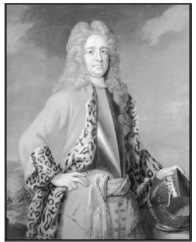 During the military campaigns, Marlborough educated, groomed, and promoted his staff officers. The captain general and his military staff exhibited great administrative, organizational, and logistical skills creating an effective combat force that fought in Europe for ten successful campaigns. Combat veterans of the battle of Blenheim included fourteen future American governors general (p.101). Sixteen officers that fought at Malplaquet became royal governors. Thirty-two officers and thirty-five senior sergeants that survived that battle went on to form and train American troops, as well as educate American officers in Marlborough’s principles of command, discipline, and drill in New York and New England (pp.159, 201). The regimental connection was an important part of Anglo-American imperial administration. Webb argues that these governors general “transformed England’s autonomous American colonies into provinces of the British empire” (p.25). He stresses that Marlborough’s disciples commanded imperial forces throughout the Anglo-Bourbon struggle to the victorious end of the Seven Years’ War in 1763. 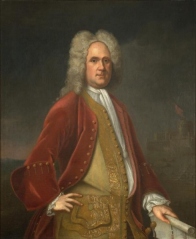 Marlborough’s combat veterans became governors general and lieutenant governors in Virginia, the Leeward Islands, Jamaica, Newfoundland, and New York (p.99). They protected British America from French aggression and promoted empire. They contributed to the British war efforts against Spain in 1718-20, 1727-29, and 1739-48. Moreover, as Webb writes, “these officers led the transformation of the governments, cultures, and societies of Barbados, Jamaica, New York, New Jersey, and Virginia during the first half of the eighteenth century. Their military, political, fiscal, architectural, and scientific leadership, the fruit of transatlantic military careers open to merit, were essential elements in the conversion of English colonies into British provinces” (p.108). Webb addresses three men in specific.  Daniel Parke, who served at Blenheim, was governor general of the Leeward Islands in Antigua from 1706 to 1710. His attempted reforms ended in a revolt and his assassination. Robert Hunter, a former brigade major and aide to the captain general, acted as governor general of New York (and New Jersey) from 1710 to 1719. He supported the accession of George I and established a Whig oligarchy to defend the Protestant succession. The author credits him with providing political and military stability. Hunter “transformed an archaic, even anarchic, colony into a stable Augustan province, well equipped to fight the French in wartime and to prosper in peacetime” (p.261). He later served as governor general of Jamaica (1728-1734). Alexander Spotswood, Marlborough’s deputy chief of staff for nine military campaigns, served as lieutenant general of Virginia from 1710 to 1722. As such, Spotswood worked to secure the defense of the colony against French and American Indian (Iroquois) threats. He lost his position due to London politics when the Stanhope-Sunderland ministry was replaced by the pacific Robert Walpole who sought improved commercial relations with the Bourbon powers.

Marlborough’s America is an outstanding, albeit provocative, contribution to the historiography of the British empire. The study is well-written and researched. It stresses the Marlborough connection and the role of professional army officers in the making of the Anglo-American empire. Webb views Marlborough as “the Augustus of a new Augustan Age” and his “legates in American commands personified the attributes of their commander.” He continues by stating: “This galaxy of imperial executives, all Marlborough’s veterans (many of them his staff officers), found their American commands underdeveloped colonies but left them maturing provinces, the frontiers of the British empire” (p.556). The study is worth reading for this thesis alone.  However, Marlborough and his military campaigns are better served by several recent studies such as John B. Hattendorf, Augustus J. Veenendaal, Jr., and Rolof van Hövell tot Westerflier (editors), Marlborough: Soldier and Diplomat (2012), Richard Holmes, Marlborough: England’s Fragile Genius (2008), as well as James Falkner, Marlborough’s Sieges (2007) and Great and Glorious Days: Schellenberg, Blenheim, Ramillies, Oudenarde and Malplaquet (2002).  J.N.P. Watson, Marlborough’s Shadow: The Life of the First Earl Cadogan (2003) is a study of Marlborough’s chief of staff, quartermaster general, and chief of intelligence.  Cadogan succeeded Marlborough as Britain’s master-general of the ordnance in 1722.  One should also consult J.R. Jones’s, Marlborough (1993), David G. Chandler’s Marlborough as Military Commander (1973) and The Art of War in the Age of Marlborough (revised edition, 1995), Ivor Burton’s The Captain-General: The Career of John Churchill, Duke of Marlborough, from 1702-1711 (1968), and, of course, Winston S. Churchill’s Marlborough: His Life and Times (1933-38) to name a few.

Dr William Young is a retired historian with more than 30 years of experience in teaching and research. He has 18 years of teaching experience at the University of North Dakota and Valley City State University. Moreover, he was a historian in the United States Air Force History Program for 15 years. He possesses a doctoral degree in international and military history and master’s degrees in history and international relations. Young is the author of German Diplomatic Relations, 1871-1945 (2006), International Politics and Warfare in the Age of Louis XIV and Peter the Great (2004), and European War and Diplomacy, 1337-1815 (2003). He has also written 42 official Air Force unit histories, two monographs, and other studies. Young is the recipient of many history awards, including three U.S. Air Force Historian of the Year Awards and a U.S. Air Force History Program of the Year Award. He has studied and worked for 13 years overseas in the United Kingdom, The Netherlands, Germany, and Saudi Arabia. He has traveled extensively in Europe and the Middle East. His hobbies include collecting and reading history books and attending college ice hockey games.
View all posts by William Young →
This entry was posted in Anglo-French Wars, Book Reviews, British Military History, Europe in the 17th Century (1598-1715), Europe in the 18th Century (1713-1789), War of the Spanish Succession (1701-1713/14) and tagged Alexander Spotswood, Anglo-American Empire, Book Review, British Colonial Administration, British Empire, Daniel Parke, Duke of Marlborough, John Churchill, Marlborough's Wars, Military History, Robert Hunter, Stephen Saunders Webb, William Young. Bookmark the permalink.